Life Story : Coming back to Tollywood 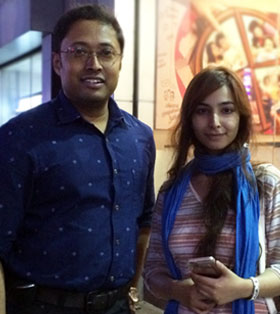 Life Story : Coming back to Tollywood - – hire models and actors to become game characters in our own games

Year 2010-2011 it was obvious to take a leap for Indian Gaming Industry, running company in Eastern part of India (Less known for game development) at least those years – we decided to enter into a complete new segment. If you remember I was talking about taking models as game character, the main problem are :

1. No studio which had setup for game shoot
2. Game shoot never ever happened in town
3. No photographer was there to understand it
4. No model ever did it hence they usually get a shock then I am asking to do actions – fight, run, talks , moves.

We wanted to do perfection, exact look of one model / actor in 3D to become superhero . Do you feel it was easy?
Well,, I've been making superheros from my childhood, thinking of dress and making superpowers are easy for me.
But I wanted to do something different, I wanted to make their dress in such a way so that we can make them in real life, and any kid can enjoy it ..
In game when it comes to making stories it has to be our own Universe, that's the plan – yah I am crazy enough to take bold steps .
I was moving in investors circle that time and saw how thinking comes from investors, how Asia thinks and how they valuate companies.
I was planning to make platform for all these models as I found there is a big gap – where production houses can find artists – verified and proper..
Initially I connected my good friends in Europe, if you remember, we made several of them as comics' hero, characters long back. They became super happy to be a superhero in Indian game title, of course it's new to them too.
The plan was to start two things together, our own game plus a portal for models and actors – I was looking for someone who can do the portal for us, it's not that difficult to make a portal, but I wanted to do it with a startup, may be handshake with him/her and grow things together.
Together we can grow faster for sure.
Srijla – she became the first model to be a superhero from Kolkata and I decided to make separate game called Katya – connect the story with Ashwatha the immortal and start a universe of hero's .
Plan started for a connected story, when we make games we need these basics
1. Game Developer
2. Game Artist
3. Game Designer
4. Game Animator
5. 3D or 2D Artist
6. Rigger & Animator
7. Environment Artist
8. Music Creator
9. Networking Coder
10. Database Coder / Developer
11. UI artist
12. UI Coder
For music we used to do in our studio in Agarpara, I was more focused in making products and platforms than making real-estate decoration in office. We hired two photographers, new comers with passion, I had to teach them how to make shoot for one model – so that we can get maximum views of her – it's not easy, they know fashion photography and pose, they never did such type of T-pose or A-pose.
Even Srijla was learning – she studied how to make animated characters to give best shot.
We started spending time together – 4 of us trying to understand theme and topics and how this character can be done properly.
Models think it's LIKE a normal fashion shoot once done it needs edit for a day and it's done, well, to make a character properly that time, it used to take 15 working days – just to make one character ready with rigging sculpting and exact look.
It don't stop with one character, it needs total environment, other characters, animation and then code to be done .
For a big games sometimes it takes 6 to 9 months to finish it.
Unfortunately when I started hiring them from Kolkata, a lot of them didn't understood the process as they are from modelling environment where they see ads coming but our game is still in making .
We decided to start Ashwathama first and I booked a domain to talk about the game and characters as story for the same.
We started making the story and wanted to tell the world that our culture from Sindhu is not playing flute infront of snakes. It used to be much larger and strong in science and technology, I started reading more on Sanskrit and started mixing with amazing people who knows a lot about bharatoiya culture.
I didn't talk a lot about someone in my life, he is like my grandfather. Late Dr Dhyanesh Narayan Chakraborty – will share the same someday for sure.
Coming back to making amazing works: we started like this :
While making characters and hiring approx. 20 models for one game title, I found someone in India who felt we can do something together, angel investment? I don't know, I found a passionate guy like me, running a website
development company hence we shake hands together.
My part is business development bring models, bring news, make things popular, he took responsibility to make the portal – I decided to invest my earnings (not company ones) – did I forget to share that I used to do lot of workshops and consult few companies in last one year?

Yah, that gave me another leap to take high-risk to invest in new ventures and grow it with gaming business together.
Long back I was unable to make understand movie directors (In 2000 – 2001) in Bengali movie industry about power of technology and game development, probably now is the right time after 10 years, they might get an understanding – probably we can make a win-win situation.
I wanted to bring disruption, maybe I am too early ?