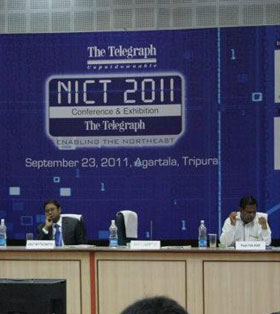 Year 2011, from ABP they wanted to take a delegation to Tripura and mix with the local business owners to see if we can do business together.
While mentoring in several ecosystems that time, I adopted a passion to help more startups who are willing to grow. I used to meet them in person in Kolkata and nearby area's listening to their idea and existing business tried to help in whatever way I can.
I was published in several press and media that time and got awards from Education Minister that time too.
Coming back to the Tripura story, few of us landed together in Agartala and hopped in to a hotel in town.
While doing breakfast in hotel, someone called my name, "Arijit can we talk ?" – It was an awesome power packed lady with full of energy, Teenat she started sharing how she want to help her local community workers and if I can make a comics based on the works that they where doing in Assam.
I got to know she is MC for today's program.
The CM of the state that time, spoke to me in Bengali and that's what I loved the most, I had relatives in Agartala, a long distance one – I referred my grandma's name, she was politically connected there, CM said, wow you are my relative then as well.
It was truly an honour for a game development and tech company owner that time coming from Chief Minister of a state.
After the program, I went to my grandma's place and invited one of my new friend from Bhutan to be there with me.

The welcome was amazing, she didn't saw me for ages, she started crying while hugging me. When I said I've to go now, she hold me tight so that I can't go  . Might be touchy but true fact the kind of land she got in those places I asked her to grow organic foods, she kept the promise.
My new friend from Bhutan was touched too with the incident, he said brother, I will never forget your grandmother.
Is it about Tripura ? NO! It's about connecting people, how you connect and how to stay in touch, I'll never forget the hospitality of Mr K K Mahapatra – who offered us lunch in a local food joint, it was JUST awesome, I will never forget Ex-CM of Tripura, I will never forget my long distance Grandma and her Hug.
What's lacking till date there? – Main issue is not how good startup culture there – main issue is exposer .
You can't have exposer in a state from internet unless we bring people who travelled the world (Not only one country or travelled for fun in EU and come back to teach, startup culture) – we need real business deal makers who have done multiple deals in the world and well connected and dedicated to the country to grow its country-men.
Anyone can mentor, may be less number of people can give market access, I had that realisation that day, that time.
All mighty probably wrote a different LIFE for me, when I look back 2011 and 2021 – where I work with more than 100 countries business clubs, entrepreneurs, investors, started our own international club and started several more helping hand for the ecosystem including our own accelerator and angel syndicate, I can JUST feel what happened in last 10 years.
First 10 years of my life of entrepreneurship was all about sustain and making people understand what I do, may that's true till date, still we don't understand in India that making own game in own studio is called a game development house, NOT that a studio who does only game art works. It's not gamers who make games it's game developers who make games. If a game developer doesn't play game, it might happen their creativity level don't increase to that level, it's not about only code it's all about creative code.
Creating an ecosystem of actors, models dress designers, starting India's own superhero oriented cosplay show takes a courage, it's NOT easy to pumping money for all these. It's NOT about burning cash, it's about creating an impact, it's NOT for GOD's SAKE animation, it's VR, AR, Game Development which involves hard core coding knowledge along with animation, modelling, sculpting, networking, cyber security, data science, database networking and so many more when a proper game is DONE, and I am not talking about casual or hyper casual games
I'll talk more on how we made India's first Epic story based RPG game with real actors making them as digital avatar.
This time, let me tell you, Tinat wanted to be a superhero in our comics/ games, trust me on this she became a great friend in due course of time, a lady with great passion and inner strength, drove us to make her a fighter character, as she was describing about her life.
That Tripura trip (land of Kirat) didn't open only Agartala, I started exploring more when I came back, it's about Teliamura, Unokoti, Shantibazar Sonamura – I found great business owners doing things in SME scale, I know it's hard to digest but some of them still in touch with me and smile when I travel out of India- call me to learn and know how things can be done.

Another small tips how I make things happen, I am hard-nut to crack, I take time to say yes now a days, I become Ravana in initial meetings and see if someone really want to make things happen or just want things.
In my small understanding it's always about giving first, giving is NOT easy it takes a LION heart to give first.
If we are talking about woman empowerment, I will share more in due course of time, why, how and where it happened in my life, a lot of others think my life is colourful, to be honest I explore LIFE at it's full, I don't go to any pub just to drink, I look at people how they act and react.
I don't go to an event to eat free food and network, Bengal that time gave me a lot of love from few people who encouraged me to do more in life, some people, sometime don't talk always- they absorb everything, that's what happened to me in one circle in my life, one of the finest learning curve where few of the people talked about my shoes, talked about the way I dress, that encourage me to become groomed and find a person who can make my dress custom made.
As an artist I started exploring the fashion world and grabbed the opportunity in small way to make fashionable items and due course of time I will tell you how we connected them with gaming world in next few posts.
Out of fun few of the people think how do I run these many business! I don't run anyone of them, I put my hard effort to make a great team and once it's done I become catalyst and bring more value.
My take from Tripura trip, never take anyone for granted and never think anyone who is small they can't grow more and can't do great in life.

When you do great, don't show the world what you are doing, show max 10% of it, but be open to people who you trust and they trust you.