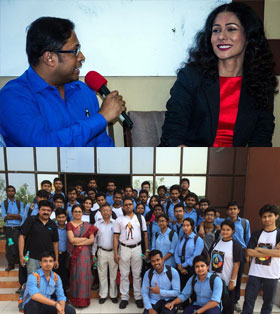 While doing several initiative and mentoring and helping startups, in the Big Entrepreneurs club, they selected me to be the Hony Secretary and take care of the roles and move things forward.
At that time there was no ED, he left for some reason and the new selection of EC committee was happening.
It was proposed by few other EC members to select me as Secretary position and I gladly accepted the same.
I will talk about more on this soon.
While mixing with several other business people from Kolkata, few of us made a good bonding and we used to meet in parkstreet for small talks and may times it used to be Mocambo for a meeting place.
I was approached by another business-man to start an incubation centre in their college and he was showing me their place in Howrah, while I accepted to help them, he asked me to seat in one of their office in south Kolkata promised to start it properly so that we can grow Bengal.
I was OK with my small network that time in Asia and India, bringing my own network and group of seed-level investors from Asia.
As a good faith, I asked 12 of known network business people to come and meet me in Park Street, in Trinca's specifically in "The Ming Room".
We started talking and the bill was on me, while talking and drinking, some of the old connections and new one came with the requirement of starting a close group of entrepreneurs.
I proposed a name, "Bong Entrepreneur", we did a several meeting after that and asked a lot many of entrepreneurs to come.
It started growing with meet-up and discussions, we started floating several theme based days, cutting the story short, it became a buzz-word in Kolkata, one of another business-guy met me in one of the birthday party of my friend and he used to run an education consultation company.

Our concept was simple to make a vibrant ecosystem so that all can do good business, to be honest there was nothing for me as my business is nowhere related to getting clients in game development from at least Kolkata.
While we were moving, we decided to give it a shape and make a legal body and one of us helped us a lot as a guide on how to make things on the legal formation.
While this was happening, from the local chapter of the global business association, some of them asked me why I am making something called "Bong Entrepreneurs ".
I explained why we need it, surprisingly the answer was, if I am running BE, I have to leave the present secretary position!
I asked a simple question, there are LOT of other members including you who hold several other positions in other chambers, then why I can't have another start-up ecosystem to be there? We are NOT harming anyone.
We are asking anyone and everyone to come and share knowledge, infact one of my great friend (a CA, CS) and an amazing mentor, he was also our keynote speaker and is part of it! His name may not be Bengali, but our target is all people who are in love with Bengal.
There was a simple answer, "If you continue with Bong you can't hold this position, you've to stop doing Bong Entrepreneurs".
I'm a super crazy person who don't want to nod or lower his head with pressure, if it's LOVE I can be controlled if it's with ego and pressure, I can't "just say yes".
Hence gladly I said, then let it be, I don't want position like this.
Bong continued the meet-ups, several people probably became close to each other, the time came when we MUST give it a formal shape.
I booked the domain and offered my server for free and another young Bengali entrepreneur made LOGO for BE. Long story – it was a joint effort from few of us.
I took a lot many of the core group to several colleges, we did hackthon for student's we did mentoring sessions, placed few of them a jury in BPlan competitions.
Somehow, within the large group, communication started who will become the president, some guys started saying, I should be the one as I started it some said it may be another person.
My focus was clear to make a group active and let them do cross-state business.
Lot to say but I am skipping this as this is one of my close to heart life story, I've been mentioned as " That Pagol and Chagol" (basically a bad word don't want to explain ) by some Sr business people in town, bullied by several others, not sure about the reason, we never took any membership charges we just used to manage our coffee and snacks bills shared among us. Many times the calculated bill used to overshoot and I used to pay from my own pocket, few of the times for sure, couple of others used to come forward.
I started travelling few parts of India to bring more people to come and join, own money own time, dedicated to build the ecosystem.
We used to have our meetings in CCD, mainly in Sec V CCD lounge (it don't exist now a days) some of the times several others offered their common place for meet-up with cost-to-cost basis in saltlake area or nearby places.
Anyway, as a nominated president of new body I asked everyone who wish to be a part of the legal body to come and proposed three dates, each time there was a problem from few others who are super busy in work.
Hence 4 of us decided to start and make the dead in such a way that it becomes open for others to join anytime.
As we did it, BE broke into two parts, someone else wanted to lead which I didn't realise! Be started its next programs, and I saw how others are looking for money to run it.
I asked everyone else if someone want to lead let him come and do the same but it might be some ego-clash! May be I was wrong and I am the negative part of it.
I got to know, after 6 months about another group which started with few others who used to come in Bong Entrepreneurs meeting.
Surprisingly, one of them used to work in an online news portal, I saw how people changes, they never think to take me "in" even though the name was similar, after few days they gave a new name and continued it.
The solo purpose of making BE was to bring people together not to create multiple groups once again, two of us who initially started this decided not to continue this mess, two of the others felt they can continue, hence I stepped down from president's position and asked the other person to run it.

One of us decided to run small programs instead of big one's. As several of others got business and contacts and several of others made some deals as well.
Year passed and nothing happened, three of us, talked to each other, one of the board member said we are added in the other group but we can't see you and I said with a laugh, I am not Bengali, hence I am not in these groups, and one of the other person asked me not to step down, he asked me to continue.
There was no point, the whole journey started with the concept of bringing people together, who can't pay membership fees, who don't have opportunity to connect, people don't listen to them, they need a platform to share and speak and handshake with equal opportunity.
It was my mistake not to continue after 3 years of running it with passion, sacrificing own business, hearing rebukes, it was my mistake to bring another very Sr person in this entity to support the cause, he did his best to bring more people in, it was my mistake to think of making it for others.
I learned big thing the day we close the entity.
Let my learning be within me, let others talk about you, let's focus on building system with people with power and giveback mind-set.
I used to do free support and help used to open my network to everyone. May be the kind of network I've is not proper for the town. So I concentrated in villages and yah I will share about it soon.
Hence I left the president position as I am not position oriented person rather love to execute. Earlier I didn't have maturity to understand why people behave to "win" when it's always accept the facts the way it is.
It's not our failure to continue the BE it's my failure completely not to run it with strong hands rather dividing the power to everyone. May be I did a LOT of mistakes in those days and I am totally OK to accept the same.
Today is the day when for the 2nd time we meet several years ago in a small café in park street.
Nostalgia? Not sure, but time wiped off the name "Bong Entrepreneurs".
Still from core of my heart if someone can bring people in a common group, I feel happy.
My learnings?
I decided to grow more and deep, with different relationship, give more business and get more power in hand to give back instead of waiting for others. So that the concept of "WE" can be done.