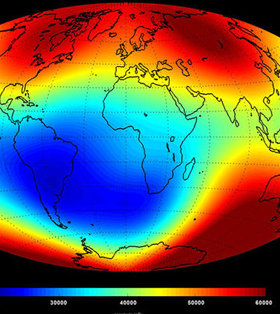 Scientists worried about Earth's weakening magnetic field: Swarm satellites to investigate.
Scientists all over the world became worried because they investigate about the Earth's geomagnetic field which is started weakening day by day. Earth's magnetic field weakening and earth will lose its magnetic field. It was started becoming weaker and decreasing. The earths inner core is cooling down about 100degrees Celsius per billion years. Scientists worried about how fast our Earth's magnetic field is decaying. The magnetic field became weakest along the middle section of a magnets side. They also investigate about hole in Earth's magnetic field. Some of them also share thoughts what if magnetic field became stronger. Now talking about how long the Earth's magnetic field will last, what will happen if Earth's magnetic field gets reversed and what will it effect. People also ask whether the Earth's magnetic field remain forever or not.
The magnetic field will not get vanished completely but it takes time to stabilize again after its reversal. There is a polarity reversal of magnetic dipole which is being investigated by our scientists. They also mention about huge destruction that may happen with our mobile phones. Due to random effect by the two dimensional model of the actual mean-field. There was a temporal damping mode which continuously which lowered the magnetic poles. The pole movement which happened last time has been several years ago. Swarm Constellation of Satellites which is the European space agency's investigating tools find out that the strength has recently been reduced to 22000nanostelas from 24000.
Earth's geomagnetic field has been started weakening between Africa and South America. This causes various Technical abnormalities. The Magnetic poles has shifted their positions from one part to another at a top speed of approx. 50-60 KM a year. 1970-2020, in between these years the pole movement increases and it became weak mostly in the region stretching from Africa to South America. i.e. the South Atlantic Anomaly. This giant dynamo can have splintered into two separate cells. Due to all these disturbances the satellites orbiting the Earth can also get damaged.
The giant Spacecraft systems can be crashed. This giant destruction generally happened every 250000 years. Scientists followed thee anomaly for the last two or more decades but now it started weakening vigorously which is very risky for people, even many of us didn't knew about that. These geomagnetic field of the Earth occurs due to the metallic and outer liquid core boundary which is 3000 KM below our feet. These magnetic field has been generated by the movement within the planets molten iron core.
Due to all these mapping, navigation and other systems in our phones may get affected. Communication system through our phones also get disrupted. These magnetic field also give rise to conjecture for an illustrious pole reversal where north south poles switch their own place. Some of our scientists share that the last reversal occurred around 773000 years ago.
Since our Earth's magnetic poles are not stationary because it is formed by its independent moving, liquefied iron core. Navigation is one of the important part taking place in all Airports if these type of situation arise our airports will also get affected.