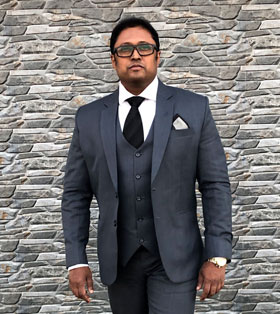 The entrepreneurs know, how to avail the opportunities, and to establish any viable industry in any viable area. So, Entrepreneurs in Balanced Regional Development of Industries, playing a very big role.
Knowledge of Market Conditions
An entrepreneur has full knowledge about the markets, like – where is the good market for a particular product, where particular product and services are to be produced, what will be the cost of production for a product at that place, to what extent the labour and capital will be available in the area, what is the likely demand for the commodity, what should be the price of the commodity, etc.

The term Entrepreneur comes from the French verb entreprendenre, which means "to do something" or "to undertake something". First mentions and descriptions of entrepreneurship come from the 18th century when many French and Italian economists defined entrepreneurship in connection with an economic activity with an uncertain profit/outcome.
Entrepreneurship developed into many forms and structures along with the industrial revolution, the events from the beginning of the 20th century, the two World Wars, and later on in connection with the formation and enlargement of the European Union. The economic and financial crisis from 2008 brought again under discussion the role of new business in the economy, the opportunities for development triggered by entrepreneurial initiatives.

In the European Union there is still a significant difference between countries and regions regarding the role of small and medium enterprises in the local economy, the awareness of entrepreneurship or benefits brought by local businesses for the population, production, markets etc.

Today, many potential entrepreneurs criticize the tough environment, the lack of entrepreneurial education, the difficult access to funds, loans and markets and moreover, the bureaucracy and administrative procedures, especially when using European money. The New Member States are facing the same situation even more intensively, because they include the majority of the less developed regions with rural areas and low income population.
The scope of this paper is to analyze the scientific literature on entrepreneurship and its influences on regional development and to help researchers and practitioners develop responses to the current socio-spatial and economic crisis.
The majority of the researchers agrees that development must be defined based on qualitative and quantitative indicators. The link between entrepreneurship and regional development is established by discussing about local conditions, which act as an attraction pole for entrepreneurs and organizations.

The attempts of defining entrepreneurship can be traced back to the time when researchers revealed some interesting statements.
In the modern economy, many authors define entrepreneurship as a process of creating new added value by investing time and effort and assuming financial, social and psychic risks and uncertainties for a monetary and personal satisfaction. Others researches focus on the characteristics and functions of the entrepreneurial process.
Regional development is a complex concept because it requires to define first the region and second the meanings of development. Regional development as a concept, but also as a discipline developed particularly after World War II and especially with the creation and enlargement of the European Union (EU). One of the main goals of the EU is to increase and maintain a higher economic level in all Member States and to decrease as much as possible the disparities between different regions.
The term of region has several understandings in the scientific literature and in the political discourse. A region may be a subnational territory, a supranational territory or transnational. In general, state policies concentrate on the subnational regions, they have the same institutions and the movements of goods, services and persons take place without restrictions.
A region may be defined in accordance with the interests and objectives of the public authorities, government or other economic and political actors, but sometimes might not correspond to the real needs of the local population.

The concept of development raises many questions and meanings. It is a vague term and usually it is defined by performance indicators or the success of an organization, region or country. We may state that development refers to minimizing or removing the weaknesses, the disequilibrium or the social and economic shortages.

The relation between economic growth and development is not clear enough. When a country or a region registers economic growth, we say it is developed, but, in the same time, it might have some deficits or losses. Development starts with elements like food, work, social equity, and considers that a development policy has to combat hunger, unemployment and inequalities.
Based on this we consider that regional development is a broad term and seen as a complex effort to reduce disparities by supporting economic activities in regions.

Starting with the 90's and due to various factors, there is a higher interest in the influences of entrepreneurship in the regions and on regional development. Politicians and economists accept today that economies that rely on the "big industry" cannot guarantee sufficient jobs for the population. Thus many countries started to invest more in the awareness toward entrepreneurship, benefits and chances for entrepreneurs as an alternative to a classical career. Countries started to invest in financial schemes and programs in order to support local initiative, to guarantee similar chances and an easy access to resources (human, natural, information, communication etc.) for a better development of the local businesses.

The link between entrepreneurship and regional development

Before researching the influences of entrepreneurship on regional development it is necessary to present the general effects of entrepreneurship in an economy.
Organizations enter into markets as start-ups or as enterprises established in other sectors. Through the market selection process organizations develop, increase their activity, or on the contrary they are forced to reorientation or decrease of economic processes. New enterprises bring new and more capacities on the market and they have a direct effect on the economic activity due to job creation and the market share they acquire. The indirect effect is exerted on the already established organization, through a more intensive competition or innovation pressure. Taking into account that the first objective of an enterprise on the market is not the profit, but the survival, it means that old organizations with similar capacities will remain on the market, while organizations with lower capacities will sell less and will be forced to market withdrawal. Another important aspect of the new entrance on markets is the effect on the work force and its availability. The job creation might have sometimes a influence on markets: there are regions where there is a lack of human resources and this may further impact the payment levels and lead to higher costs for the existing organizations.

Possible factors that influence entrepreneurship are diverse and connected with the local conditions. Some of them are mentioned bellow:

• research and development activities with innovative results that facilitate new
• market creation or a higher productivity and better competitive ability;
• economic growth and structural change;
• socio-demographic changes – especially in the regions with a lower birth rate and
• higher life expectancy there is a higher need for social services;
• political changes – dissolution of market entry barriers, easier access to local resources;
• climate change – people and organizations are forced to search for alternative
• energy and fuel sources;
• easier access to capital (e.g. state or European funding schemes designated for
entrepreneurs as an alternative to expensive bank loans). The differences between regions regarding entrepreneurship and development are influenced by the local entrepreneurial culture. Regional conditions influence directly and indirectly entrepreneurship. One direct effect is the variable behaviour of the entrepreneur from different regions. And one indirect effect is the fact that some sectors or industries need entrepreneurs with special skills and because of location conditions they are concentrated is a particular region.

But this type of concentration is also a consequence of high education investments, of the fact that an important part of the local population has entrepreneurial activity or the region offers better conditions for entrepreneurs.