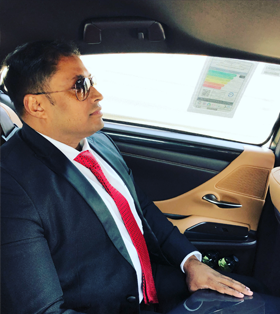 It's been a few months since last wrote about augmented reality (AR), and, if anything, AR activity has only picked up since then — particularly in regard to smartglasses. pointed out then how Apple's Tim Cook and Facebook's Mark Zuckerberg were extremely bullish on the field. and Alphabet (Google Glasses) and Snap (Spectacles) have never, despite a few apparent setbacks, lost their faith. can't do justice to all that is going on in the field, but want to try to hit some of the highlights, including not just what we see but how we see.
Let's start with Google acquiring smartglass innovator North, for some $180m, saying:
We're building towards a future where helpfulness is all around you, where all your devices just work together and technology fades into the background. We call this ambient computing.
North's founders explained that, from the start, their vision had been: "Technology seamlessly blended into your world: immediately accessible when you want it, but hidden away when you don't," which is a pretty good vision. Meanwhile, Snap is up to Spectacles 3.0, introduced last summer. They allow for 3D video and AR, and continue Snap's emphasis on headgear that not only does cool stuff but that looks cool too.
Steen Strand, head of SnapLab, told The Indian Express:
A lot of the challenges with doing technology and eyewear is about how to hack all the stuff you need into a form factor that's small, light, comfortable, and ultimately something that looks good as well. Snapchat is very good at taking something very complex like AR and implementing it in a way that's just fun and playful.
It really sidesteps the whole burden of the technology and we are trying to do that as much as possible with Spectacles.
Snap claims 170m of its users engage with AR daily — and some 30 times each day at that. It recently introduced Local Lens, which "enable a persistent, shared AR world built right on top of your neighborhood." And then there's Apple, the leader in taking hardware ideas and making them better, with cooler designs (think iPod, iPhone, iPad). It has been working on headset-mounted displays (HMDs) — including AR and VR — since 2015, with a 1,000 person engineering team.
According to Bloomberg, there has been tension between Mike Rockwell, the team's lead, and Jony , Apple's design guru, largely centering around if such headsets would be freestanding or need a companion hub, such as a smartphone, that would allow greater capabilities.
Although the headset is less technologically ambitious, it's pretty advanced. It's designed to feature ultra-high-resolution that will make it almost impossible for a user to differentiate the virtual world from the real one. Apple continues to work on both versions).
Not to be outdone, according to Patently Apple, "Facebook is determined to stay ahead of Apple on HMDs and win the race on being first with smartglasses to replace smartphones." For example, earlier this year, Facebook beat out Apple in an exclusive deal with AR display firm Plessey.
The company's goal is "glasses form factor that lets devices melt away," while noting that "the project will take years to complete." It continues to generate a variety of smartglasses related patients, including one for a companion audio system.
Just to show they're in the game too, Amazon is working on Echo Frames and Microsoft is still trying to figure out uses for Hololens.
But what may be most intriguing smartglasses may be indicated by some recent Apple patents.
The main patent covers a powerful new vision correction optical system that's able to incorporate a user's glasses prescription into the system. The system will then alter the optics to address vision issues such astigmatism, farsightedness, and near-sightedness so that those who wear glasses won't have to them when using Apple's HMD.
It's worth pointing out that the vision correction is not the goal of the patent, just one of the features it allows. The patent incorporates a variety of field-of-vision functions, including high-resolution display needed for AR and VR. But vision correction may be one of the most consequential.
Two months ago, explained that Apple should be more interested in AR than VR because:
60% of people wear eye glasses. So, if Apple can disrupt the eye glass market, like it disrupted the watch market, it can sell 10s of millions. So, the teams that are winning Tim Cook's ear are those who are showing how Apple can disrupt eye glasses. Not teams that are disrupting VR.
Doug Thompson elaborated, "If it can grab 13% of the market for glasses, that's an $18B market, nearly double the current Apple wearables business to date." Although he believes AR is coming, he also believes: "The point of Apple Glasses won't be to 'bring AR to the masses'. It will be to create a wearable product that's beautiful and that does beautiful things." And this was before the news broke about Apple's new patent.
I've worn glasses since elementary school, and it's a bother to have to periodically get new lenses. If I could buy smartglasses that automatically updated, I'd be there. Warby Parker, Lenscrafter, and all those independent opticians should be pretty worried.
Thirty years ago, if you predicted we'd all be glued to handheld screens, you'd have been scoffed at. I think that in perhaps as little as ten years it is going to be considered equally as old-fashioned to be looking at a screen or even carrying a device. Anything we'd want to look at or do on a screen we'll do virtually, using the ubiquitous computing power we'll have (such as through Google's ambient computing). This next paradigm shift is computing that you use while walking around, while moving around in space, the next major leap in computing platforms," called "spacial computing."
We should stop thinking about AR as a fun add-on and more about a technology to help us see what we need/want to see in the way that best presents it, and smartglasses as the way we'll experience it.