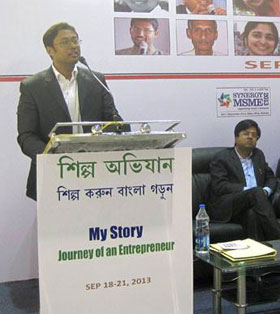 While networking and meeting new entrepreneurs in town, I met an amazing person in Shibpur, I was a speaker in one of the EDC organised meetup and Mr A Bh*********a spoke awesome that time and I got to know about their organisation.
While sharing what we are doing, he expressed his inputs about what we are doing is awesome, may be for the first time someone appreciated that we are into game development and that too in making Indian Superhero from Myth,
Epic and folk and connect them in science fiction with own storyline.
In 2013 the time came when they were doing Synergy as a summit in WB to bring lot more entrepreneurs', SME and asked me to speak in the said summit.
It was before BGBS started.
While I was preparing for the speech, from the Entrepreneurs club I was a member, all of a sudden President of that time said why you are the only speaker from our organisation !

I was totally surprised, it was an invitation from Mr A****** !
Mr President said, you can't be an individual speaker, we will do a collaboration with them and we will send a group of others as well, and you've to represent us.
I said that's fine and great. But the look I saw in his eyes looks like I've done a mistake of my lifetime, till date I am unable to understand the same!!
While those things are happening, in 2011- 2012 we had amazing release of our own game title Ashwathama the Immortal, and I am sure it is India's first RPG with real actors as 3D model with a story from Epic and translated into a complete new universe.
I was super happy to see the growth of the game in China with our publishers who put that in a different name for localisation, slowly I was inclined to cosplay to be introduced in it and was introduced to another KOOL boy from Kolkata Rishav Poddar who agreed to make music for the same…
It's not easy to think and create music for a new game with new concept, for sure I'll talk more about him in next writing and how we did the shooting and made a game with kalari fighting style (well I learned it so that we don't do mistake)
My takes while speaking in Shilpo Abhijan while I was speaking, a lot many Govt officials started encouraging me! WOW that was amazing for me. I was talking the entire several years' journey and the kind of disruptive works we are doing in virtualinfocom, that time I started computertrainingindia as a structure to teach programming language, graphics and free tutorials about all these. We collaborated with several Indian startups – we started taking job vacancy and started giving training on the basis of their req as crash course.
When I shared that info to them, as it generates more manpower, several of others LOVED it and wanted to connect for a collaboration.
Expanding in different verticals of business became my passion, just like old days, I started travelling and mixing with basic development houses who make agri, create garments, make jewellery.
While moving to different districts I got to know about new business and understood the pockets where all new ventures can be done.
I as trying to understand if we can make them online, we took several orders to make website, somehow website development became a new path for SME and MSME for us, but the way we did was may be not treating them from the part of making website

We started understanding their pain and then gave solution, while doing such, I met a lady who wanted to scaleup her dry-flower business,, wanted guidance and mentoring
A class 8 pass lady, wanted to grow! Said I can't speak in English, I don't know how to do business me and my mother can only create such items, I asked her to learn a bit how to make fashionable dress with dry-flowers on it and if she can make umbrella with them.
She was clueless, called me several times, while we did a photoshoot for another game (fight of the legends ) we did few fashion garments as dress of the fighter for promotion of the same and I was thinking of make a fashion mag digitally I asked the lady to come and see how we think and work, I was watching a "student" who is asking several questions and learning at the same time, English was not an issue it was thinking process..
She had an idea how she can make it, we connected her with one of my friend from EU- she used to run a portal of selling fashionable items and used to sell umbrella in EU.
The connection was awesome (let me tell you, we did my EU friends website for free and her office couldn't think how can an Indian company make website for free !! ) – well, Shilpo Abhijan opened my mind to see beyond an event, to execute what's needed for my land, our country.
Learnings from the Japanese billionaire opened my mind few years back on how to give back, learn more from practical life.
Understand pain of another same business person – the BIG question to me was how can we fill the gap!

Can we connect the dots!