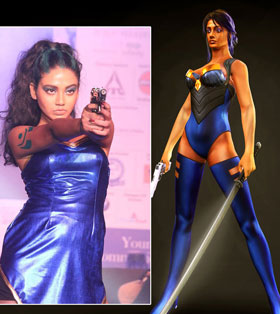 People love to follow the characters of superheroes and cherish to imitate the roles of such superheroes. Some superheroes use their super capabilities to fight the villains and crime and also receive threats from supervillains. Some renowned figures of superheroes are Spider-Man, Batman, Captain America, and cosplay can be wonderful to imitate such superheroes.
If you see the movies of the superhero characters, animation of superheroes or even in video gaming, you will find that all the superhero characters wear excellently style apparel. These costumes are something that all fans want and sometimes at a premium price. Designers with the help of technology can now make amazing designs and can bring ideas in real life. There can be excellent character design resembling tollywood models or models of mumbai actors with the designs in cosplay. With ideally designed superhero costumes you can easily become an indian superhero, and become popular quickly.
Why people love cosplay?
Cosplay can be for many things whether it is a love for the character or portraying a loved character, or to get appreciation from the peers or even mimic the role of super bad people. It can be for fun like any hobby or sport or for brand shoots or attending parties or conventions. There can be many superheroes that may either be handsome or can be shy and average and in both cases, it can help people to progress phenomenally.
There can be more breathtaking costumes and more exciting participation from people that can make Indian cosplay more exciting. Superheroes can make you awestruck with the live adaptation formats and now the software can make the characters livelier to represent character like manga. You can see a brilliant performance of first Indian cosplay characters in live shows and can realize the potential of the cosplay performance.
What are the inspirations for cosplay?
The majority of cosplay players takes inspiration from movies and look forward to getting the right components to imitate the role models. It is a challenge for the designers to meet the demand for high fashion for the people that want to perform an excellent role. When people dress rightly like the kolkata's first cosplay, it can easily mesmerize people and people start liking the characters more and more.
Comic conventions can be another motivating place for the cosplayers to demonstrate their skills in front of the fans that can recognize the characters immediately. Whether it is a love for the characters or to represent a game design, the enjoyment that a cosplayer can get by drawing attention from peers can be immense. Also, the site devoted to the comic characters can be another source of inspiration for the cosplay players to imitate the roles and get popular quickly.
When things advance further, you can see more Indian superheroes with breathtaking costumes that can make them look better than the comics and can make them the living idol. Wide prospects are there for cosplay both for the players and for the designers and it can make future superheroes easily.