Life Story: Making India's first epic based RPG game – the kid who made the entire music 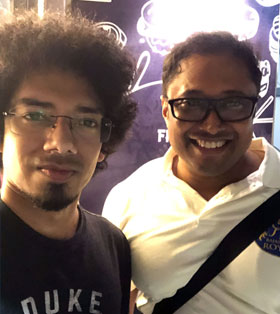 Life Story: Making India's first epic based RPG game – the kid who made the entire music

Since childhood I made several comics (drawing, dialogue, story ) on my own, explored old Indian science behind Dharma and Myth. Time came when I decided to make it as a game in a different story- our own universe of heros. Year 2010: I was invited to share our business in Bangalore in one of the pitching competition, while sharing I saw something in one of the Jury's eyes, got to know they run one of the game art outsourcing company based in Bangalore.
I became really happy that I got someone who is from the same filed. Somehow probably he didn't like that we are making our own game titles! We didn't win it.
I travelled to extreme south of India looking for Kalaripayattu fighters, as that was my main target, not to pitch in Blore, I am not in winning BPlan competition, travel happened to learn and understand the oldest fighting style. Infact after the pitch I told another guy that you will win this, I know he looked at me and said how do you know? I said I am judge in several such Bplan comp, I know how mind-set works.
When I came back, we started talking about making the game available in market, we did several photoshoot of local models and two of my friends (model) from Europe said they want to be a part of it, they did all possible multiple times photoshoot, I had to teach them how to do it.
When passion connects with work, magic happens, we were about to make music for the game, and all of a sudden one of my business friend asked me if I can meet his son.
The kid came and we started talking, he said he make music, play instruments. I saw eyes of a person with same passion to grow and expand.
Rishabh Poddar, is such kind of person who understands how to say "yes" and how to put brains behind smoked screen.
After so many changes he and his team made the music for Ashwathama the immortal, we had party in a local food joint with all our other employees.
Why in my story he is important? Because when he acts or work, he always asks the next step, he didn't do music only, we shared LOT many amazing moments together, explored LIFE, I rebuked him couple of times to make him angry, he understood anger management.

What to say!
When he applied to USA he asked me can I have your ref? For sure the answer was "Yes" from me.
He is a kind of person who want to grow his family business and understand the "learning curve "on next generation business builders, understand taking risk and learning still the path of life.
When someone is good in making music, please understand his/her logical part of the brain works much faster than others, when someone don't talk a lot to others, have his/her own world, please understand he can execute things faster than others,, stop saying someone is introvert or extrovert, it's all about how you groom it's all about how you update and "be the change".
Dedicated to you my darling, from a crazy game development company owner, who still thinks people think logically and all are good in their own way.