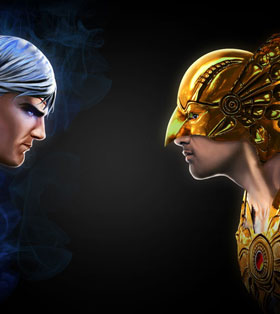 We have all played video games, right? It offers an immersive experience. But have you ever noticed that all the heroes and superheroes have their origin in the foreign lands, resembling popular actors? Don't you feel it's unfair on our part to not have an Indian superhero to entertain us? Well, ofcourse forever things cannot go the way it has been. We need more of Indian characters to rule the world of video games. Thus, the need for companies like Virtualinfocom is immanent.
Superheroes in the Indian space
Virtualinfocom is the leading game development company. It was established in 1998. You may recognize the company synonymously for its diverse innovations in IT, animation and game development. And holding their hands India has got it's first-ever superhero characters. If you are a regular game player you might have come across several characters that look like several movie actors. Indeed today's gaming industry has many characters that intricately relate to our culture and mythology. This is the gift of Virtualinfocom to the Indian gaming industry. Virtualinfocom and Indian Superheroes
The company has developed animated characters influenced by multiple reallife actors. The games are inspired by certain superhero films from India and Bangladesh. In fact, they are the first ones to develop RPG mythology-based games. Some note-worthy works of them are Bizli (based on Bangladesh's first superhero movie), Boss2 (West Bengal's first game based on a movie Boss 2 with lead actor Jeet) and game on the popular children's TV series Shaktimaan, where Mr Khanna is 3D simulated as game character. The company has also successfully delivered our neighboring land Nepal, its first 3D racing stimulation game, Bhutan its first racing game in 3D. Additionally, in recent times (from 2016) they have taken their hands on cosplay. They have produced India's first-ever portal on cosplay and have also successfully put up West Bengal's first cosplay show.
Importance of Indian Superhero creation
Virtualinfocom takes a keen interest in artificial intelligence, animation, virtual reality, augmented reality and mixed reality for game development, blockchain solution, short films, graphic designs, animated Movies, Comics. With the help of Machine Learning Codes, the ar gaming developers created games and cosplay for all cross platforms like Android, iOS, Nokia, Samsung, Intel, Web (Social Networks & websites), Opera, Facebook, LG, Amazon, etc.
Creating superhero characters has its own implication. For a business, a superhero character can be counted as an intellectual property. However, it is not like other industrial intellectual property which involves property and designs. Companies designing their superheroes can use them for branding, like putting them on their product labels, stationary items, clothing, etc. They may be used to develop toys based on the game, movie, TV series, etc.
By broadcasting a superhero TV show there would be several passionate fans regularly watching the show. Yet, they do not directly contribute any monetary benefits. However, telecasts help attract people who know nothing about these superheroes. This enhances the familiarity and recognition of the character in the greater world. And increasing number of viewers contributes to monetary benefits of the producers.
As the IT company makes use of cutting edge technology for developing superhero videos, animes, comic characters and games, you might consider getting in touch with the company to get your own superhero characters.