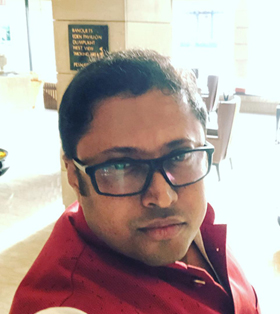 It was 2001, I was doing my graduation in economics, apart from that, I used to do machine assemble to sustain my baby venture in Kolkata. I used to talk to film directors about making VFX & Animation where in VFX was considered as editing in those days. When I was trying to talk about game development (PC game development structure), people used to look at me like; I’ve done some mistake in life.
Well, while moving from one shop to another to get best rates about local computer systems, I met my school friend Biswajit in a local shop. He was in same business; he used to sell assembled machines to local houses and offices too. After a chat over sugarcane juice, both of us decided to work together. I used to carry those heavy machines in local bus alone and used to assemble them together.
He used to do awesome assembling in Sodepur area near Kolkata and we used to do a lot of sales and service. On those days when we used to make a system for home use, people used to do rituals / puja before the computer starts.

While doing all these activity for over 3 months together, I met another person called Suvankar, a nice gentleman older than us, but in the similar domain.
My specialty was computer software coding and software n networking, Suvankar was awesome in hardware, he could detect any hardware problems and Biswajit used to be a amazing guy who can assemble a PC within no time.
The trio became friends like anything, It was me who started a school in my house where I used to teach code to the local school and college students, in no time my home institute became our own office and chatting place.


Suvankar used to stay in his uncles place in Kolkata, his original home was in Sundarban’s , a nearby local village. One day, he said he can’t stay in with his uncle, due to some family issue and he had to go back to his village.
Both of us got a shock, it was amazing business we three were doing. But with broken heart, Shanku (Subhankar) had to leave Kolkata- us- friends- partners.
We felt like, we lost the world, Biswajit took a break, so did I, we used to do things out of passion.
I concentrated on teaching student’s more and more, my student based increased from 80 to around 150 where I got candidates for animation, programming and networking.
One fine day, I got a call from Shanku (Please remember it was 2002, cell phone was not there with me, it was those old base phones).

He asked me to come to Sundarban’s . It was around 5 hours journey from main town to his village and train used to go till Kakdwip, and it was single line train line after few stations.
When initially I expressed that I will be travelling to Sundarban, my parents said there is Tiger it’s a jungle. There is nothing for IT in that place; there is no electric connection as well.
Umm, well for me that was a challenge, the question was, why can’t I start another training school in a village where you get Royal Bengal Tiger. Wow, that will be just amazing.

So at 4:00 AM I started from my house and changed three trains and one bus and reached in Namkhana - the river bank, it was “hataniya- doyania” river where I got old boats, to cross the river. I paid 20 paisa to cross the river. Took another bus and hurray, I was there with Shanku, in his house. A lovely joint family, with three brothers. It was an amazing experience for me as I never stayed in a village like this.

We took local cycle and went towards a school called Devnagar high school, I met a guy called “Chapal da” who used to run a book shop in front of the school, he had extra space and we took the place as rent, well yah, there was NO electricity to run computer, but my super-hero friend made system with generator to run a PC and I installed req software to teach. Basic compilers and plugins.

For you guys, it was yahoo search engine we used to use and at least we didn’t knew about google as search engine in 1999- 2000 . But in that village there was no internet, how can you expect internet if you don’t even have electric connection.

Amazing fact, I used to travel every Saturday to take class in that village, stay for a day (Sunday) and in morning I used to take final class, take a last bus around 2:30 PM from Namkhana to Esplanade. Who said you can’t run a institute without electric connection? We had more than 50 students in first two months, slowly it increased, I started teaching classical animation to 3 kids out of passion who can’t pay our fees, and they were really poor. Well, it doesn’t matter, we used get unconditional LOVE. Several times, we used to be with Chapal Bhaiya for amazing food his mother used to make.

When I used to cycle in that village, people used to do “pranam”, showing respect as teacher. Life became hectic but I found love while teaching student’s.

In my next writing I’ll share details about how we got offer to open another institute in Ramnagar a far way remote village and expanded like anything.
What I learned is, never say NO to any option coming your way, if you can explore that and nurture that. Risk taking is really good, there is no harm in it. If you fail, you will learn few things with will add awesome value to your life.