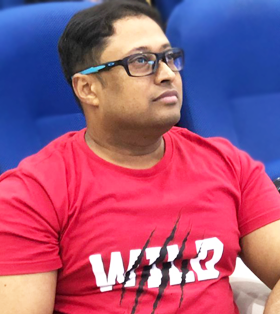 Year 2005- 2006, I was deeply involved with outsourcing works, animation jobs and making game arts for several companies. Virtualinfocom became hub for student’s - engineering, school students and student’s who want to learn animation. Some of them started learning various different technologies from me, so I was updating my knowledge on different software and programming language.

As a science student, I used to think everything on logic, and for me math used to be the biggest logic. I used to write science fiction comics and stories and used to ask my student’s to read it, some used to laugh at me in my back, some used to appreciate.
I started drinking wine and various other alcoholic drinks to mix with the business community in that entrepreneurs’ network. Half of the time, I was talking Greek, and they used to talk Mandarin , ha ha, I was too technical and they were more business minded. I slowly understood, to do business it’s not that important to be a great technical person who can do everything on his own. Hence I focused more on team building. Once upon a time the Punjabi business uncle said, team is who can take bullet for you, not the people who are working for you. Hence, I was trying to make a solid team instead of employee. I took a small flat near Sodepur and put few guys there, divided the institute and the office. The business model was simple, in training institute we used to teach and several of them we used to take as employee in the office. It’s not that we used to get a lot of work for animation, but yes, our need was not that high and we used to sustain. The question was in my mind, how I can create my team, who can be my shadow! My MCA was over and I am now full time into business. Investing a lot of money from the earning I am doing on making our own animation story. Making own comics.

All of a sudden, one day, a person came to my office asking if I can do few things together, they used to run a BPO in local area. He asked me if I can go and meet his USA based partner in other part of the town. Well, already I had bad experience with partnership, hence I initially denied. But the USA partner of his called me and asked me if we can meet.

In a fine Sunday (Sunday used to be my most busy working day as school kids, college students and office workers used to come and learn directly from me only), I went to meet the gentleman. He was explaining me what they are doing and if I am interested we can do a joint venture in BPO business, I tried to explain him, I want to make stories live through animation, games and comics, BPO is not my cup of tea, I don’t understand BPO. That fellow used to work in a very large organization in USA who manufactures chip for motherboard. He said “This is first time I can see someone is not interested in making quick money. As you wish, do you want any help from me?” I asked for help to publish my created games and animation, it was not in his domain, he said he will get back to me. Yes he did after several years . That’s a different year and different subject, I’ll talk about it soon.

While talking, he asked me if we do video presentation, I never thought about that, while returning home, I was thinking that’s one of the best ideas to make things in video for corporate companies. But I had no idea how to do editing, in fact we never had editing setup. So, before I start, I started looking for someone who can edit for me. I asked the entrepreneur network if they know anyone who can help me. They had none.

Well, when you really search for it, you will get your things in hand, I got to know few people who used to do photography, it was not my passion, but as an artist I thought, maybe I should try it. May be I can get an editing guy while entering into photography. So I started with a basic SLR camera and started nature photography, slowly a person from south part of Kolkata called me for a meeting. I met several photographers and passionate people. I liked their thoughts, while doing that few of them asked to make website for them, it was damn easy for me. We started making website with a small team of 3 people in Sodepur for lots of individual artists and small level companies.

To tell you honestly, I was not earning a lot, I was paying 90% to my employees, and the flat I bought, took most of my savings. When I used to travel in local train, my black shoe used to become white and grey and my white shirt used to become yellow, so I decided to carry one extra pair of shirts and one extra shoe in my bag, so that I can change before any meeting.

As I didn’t get someone who can edit, I decided to learn it, while doing that, I found the software was easy it’s just creativity that’s needed to make the magic happen. I started going to known editing house, and started talking to people and yes, I got one person, who used to do editing for movies on those days. He was, somehow not happy with his work, I offered him if he can join me as employee. He said, he would like to be a part of it as freelancer. I agreed and he asked me if I can get orders so that he can run his family. Slowly I realized he is in love with a girl and wanted to marry her and at the same time, he doesn’t want to do job. He used to drink a lot on those days due to frustration, hence I decided while giving him work; let me help him.

I often used to mix with him and used to drink together, he was explaining me why he is frustrated, when I come home, my mom and dad used to rebuke me as I was drinking a lot. I still remember, the day his girl friend came and rebuked me like anything. I was super quite, focusing on drinking with him. A month passed and he asked me if I can give him some money in advance, it was only INR 1500. I gave that and again after 3 days he asked me if I can again give him advance. Now I said why shall I give you money in advance? What have you done so far? You are a person who only drinks and talk shit; he really got angry and shouted like anything. I said if you are an artist then prove that you have spine, get work by your own and buy your own drink, you should be happy. You should drink more as artist usually drinks as you think so. He was clueless, couldn’t speak; then he asked me what you want me to do? I said get a life, I am giving you words that I’ll give you enough work to run your family and get married, you need to in return leave drinking. It’s not a movie, it’s my own life, and the magic happened, he left alcohol. After 5 month he got married, he came to my office and said, “I am not going to leave you till the time I’m alive.”

People leave from organization, it’s 2019 he stays in a different country now, but till date he is with me, he runs a freelancing group of editors and till date take work load from me and deliver on time. When I had bad times during 2008-2009, he never asked for any money, for a yearlong he did things for free, so that I can again rise. Yes he takes the bullet for me and I take for him. He never left me.

It’s the relation you make, it’s not only the organization, organization is organised and created by people, invest time in people, some will do badmouth some will say you are joker, some will leave you, remember you will get very few people who will be your team. Enjoy doing business, but do we feel, giving money will actually make employees loyal? Helping them in bad times might not always make people stay for you. Choose the right one wisely.

Not always every work is for you; learn to say “NO”. It’s good to say no. Get a mirror of your own “Self”, ask it what it wants, and go for it. People will be people, if you want to make anything, listen to everyone, then filter it and do your work.

Disclaimer: This is a personal blog, narrating my personal entrepreneurial journey. While on this long journey, I have come across different people, companies and unexpected quarters; each of whom have helped shaped my life. My writing is an attempt to reflect and capture some of the moods and emotions that have occurred over the last two decades. Kindly excuse any grammatical errors, typos or mistakes of any kind. This blog is written from the heart and is purely an expression of my experiences.