Life Story : Sharing about Digital Human and leading a panel with legends who make products. 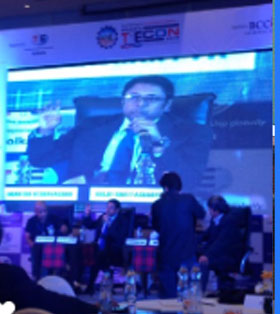 Life Story : Sharing about Digital Human and leading a panel with legends who make products.

Year : 2015-2016 while mentoring several startups from various parts of India, I was introduced to one USA based platform F***d*r Ins****te, and eventually exploring the amazing idea stage start-up's they have.
I started travelling different parts of India to chk their ecosystem, be that in West or Mid or South or North, almost every month out of passion I travelled to meet them and shared what I know.
In south part of India, someone recognised me as a contributor to Indian movies, and asked if we can make few things together, as a connector I used to connect people with right kind of approach, I had one of my good friend from Mumbai who is a filmmaker and hence thought to connect them.
The concept of making digital human, from real models was amazing; I started exploring more options to make that happen in Asian & EU countries.
Let many celebs from their local ecosystem raised hands to become character in our platform, and "together" concept became more strong. Couple of them became model in Pla*B*y and various other platforms.
I was in talk with hardware manufacturing units, along with few of my EU and Asian startups, making a structure for them to expand and explore social media influencer's network.
Social media was not like this what it is today, VK was introduced to me by the founder when we meet in Korea last time, I started exploring more and more local app stores and local collaboration's in different countries, and hence I became more nomadic than ever.
As I set the team "up", my focus to virtualinfocom became less, and expanding "more options "yield me something which I will share soon.
From Mexico, USA, Italy, Russia, Spain, Japan, Korea, Taiwan, Vietnam, Arabic countries, Indonesia, UK I started getting lot more partnerships than ever from various different fields, hence doing cross border trading with their products and understand the entire process was in the pipeline…
Ofcourse my experience, working in oil rigging company's presentation and working closely with their Sr manager helped me a lot to gain knowledge about "sea life", she shared a lot of inputs while we were making their solution. – I'll be sharing that soon, as I forgot to write about it.
Coming back to the heading of today's writing, the big event organisers asked me if I can make a panel with animation and related products.
I asked co-founder of AnimationX**** along with few others from Bangalore like "Easy**p" to come and explore our business club and wanted to have a panel with them.
I used to love the club, as when I joined them I was a student member and eventually now I am now a Charter member. Within the mega event, I proposed to bring founder of Un**y as we know each other and that engine is gonna make a mark in gaming Industry I assumed it.
Somehow I was unable to make them understand what's Un**y as gaming was not that popular that time as a business in Kolkata (Though I am running it since 1998 made several education programs, multiple press news released), it's my mistake for sure.
Before the event, one of the panellist came to explore Bengal and it's ecosystem in animation and game development and hence he did a meetup here and we all did a meetup locally in another hotel to explore possibility to work together.
While hosting the panel, we were talking about the future that's coming and probably lead the future of second-life.
Possibilities of virtual reality and how we can make the market ready, Indian product companies contribution towards the tech industry.
When we started talking about the real human- 3D character, out of passion I started sharing our few works to relate the theme and topic, one of my entrepreneur friend, after the panel is done said this might not be the end, can you do more such new tech sessions more?
I took the input and started exploring "connecting tech with business" as a theme to bring small group of businesspeople together.
To be honest, it was not leading a panel, it was more of taking inputs from others to make focused business meetups.
I decided to make that happen in few Asian countries than only in Bengal. Hence it's not going to be only game development and virtual reality, it will be more in business expansion and good trade with innovation, it's not going to be only angel investment or VC funds it's going to be connecting family office and large global banks; but as I learned few inputs not to share everything to the world, I kept a little stealth mode "ON".
I was supposed to travel to another Asian country for another business conference.
Hence, maximizing good-network and filtering of great business to come forward and making a large network started globally.