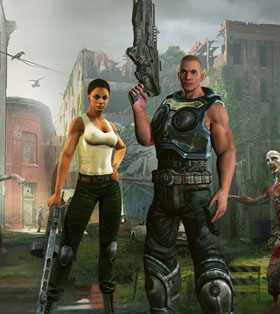 Developing a game properly and having total control over the game, the game engines can be the best way to go. Working with game engines may require the help of advanced developers and experience as there are endless possibilities of customization. With the preset modules, effects, libraries, tools, etc, the game engines can offer excellent game development solutions, and you don't have to start from scratch. Now the games are more fun to play with the use of Artificial Intelligence in games that can provide challenging opponents. AI can enable NPCs or non-human characters with adaptive, responsive, and intelligent behaviors that are similar to human-like intelligence. With it, NPCs seem highly intelligent and can actively change the level of skills and the game appears more personalized to the gamer.
Why Unity and Unreal game engines are so popular?
There is a never-ending debate in the market between the game developers and the digital artists for years now about the choice of the best gaming engine- Unity or Unreal. There is no doubt that these two game engines are most popular among all other game engines present in the market. Large studios, as well as indie developers, use Unreal and Unity engines for the unique characteristics of these game engines.
About Unreal game engine: Over the world, the Unreal engine is one of the most popular game engines and it is the most successful video game engine awarded by Guinness World Records. If you are working on a sophisticated, large game and looking for a strong real time 3D game engine, Unreal can be the best choice.
It will need high-end devices to run the relatively larger games of the unreal game engine. The developer of the game engine is Epic Games and it operates on OS like Windows, iOS, Linux, Android, etc. The list of customers is many with reputed names like Microsoft Studios, Activision, Capcom, Nintendo, etc. There are wonderful games built on the Unreal game engine like Marvel Heroes, Infinity Blade 3, Arkham Origins, WWE immortals, and many more.
About the Unity Game engine: Unity game engine is a platform for the designers, artists, developers and it creates and collaborates gameplay sequences, cinematic content. It uses 2D and 3D design tools, a powerful animation system and instant play mode for editors for rapid editing and iteration.
The open-source ML agent's toolkit Unity plug-in can enable games and simulations for serving in environments for training intelligent agents. Also, for AR, Unity has a longer and stronger role than Unreal and it is the only platform that developed the holo lens app. The developer of the Unity Game Engine is Unity Technologies and the OS that supports it is Windows, iOS, Mac, Android, etc.
However, the default layout of Unity remains very dull and is below optimal. Also for people who love working with dark themes, withholding the dark theme beyond a highly-priced paid subscription is surely a cheap move made by Unity. With it the workflow gets changed with icons missing or hard to find with new updates and more errors and bugs are coming with updates that get hard to solve.
Unity cannot be said to be artist-friendly and there is no toolset for basic modeling that can help in making prototypes. You will also not find toolset for alignment function, array function for level designing. There are a lot of buggy features released by Unity without prior testing and the documentation part of Unity seems to be very poor.
Both Unity and Unreal game engines can be a good platform for developing casual games, Unreal seems to a better choice.
Which game engine is suitable for you?
There are a few key considerations that can help you make the correct choice between the two leading game engines for the game studio in Bengal. Unreal offers high-fidelity visuals whereas Unity takes a lot more work to get the assets looking close to the level of Unreal. For big games or production from large studios, Unreal may be the best choice as it can quickly produce photorealistic assets.
Unreal may not be the correct choice for you if you are targeting to run on a low powered device. For low-end devices, Unity can perform better to create complex projects. If you want to get the best out of Unreal, you need to have a specialist team dedicated to different parts of the process.