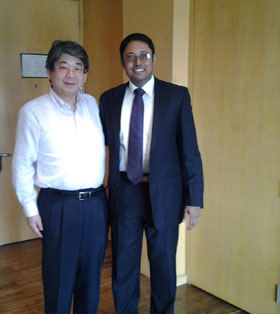 Life Story : Learning how to be more humble - Japan - Sanskrit - Time & amazing philanthropist
While I was moving fast, I started becoming techie and more focused on learning the investment world, on that time, a lot many "investors" wanted to invest in our company.
2007 probably I was the only "member" who traveled to Delhi to join Ti***n 2007, along with our president, that time for sure I was too young to understand how business world works in reality.
I used to listen to the "real heroes" from industry and I was dare to be different.
President of Kolkata chapter meet me in Delhi in the event and we had a small brief talk about how this network can grow my business.
Somehow I am talking about 2007, I am talking about year 2010 probably, when I am doing good, we had launched several Indian game titles, started making partners.
I was invited by a Japan based publisher they wanted to meet Indian game development companies and grow their network to help Indian gaming companies.
It was Mumbai, once again and it was a one-to-one meeting, I was touched by their hospitality, due to my actions in more tech and business n finance in learning stage, somehow the amazing gentleman liked me, His personal assistant offered tea (he made it as a good gesture).
The great personality, meet me with an amazing smile and greetings, we started talking with the help of an interpreter, I realised "English is just a language" you need your body language and honesty and dedication to win people's hearts.
I was too, too small in front of him as a company, he never ever disrespects me for it, encouraged me to do more.
Realisation: People who are really BIG, they are humble. You need to learn whom you are offering what, everyone needs something to be connected and work together.
Let me take you to my childhood, during school days I was touched by another amazing personality in my life, I call him as "Dadu" – grandfather, teacher of my mother mainly in Sanskrit – ধ্যানেশ নারায়ণ চক্রবর্তী শাস্ত্রী ( Dr Dhyanesh Narayan Chakraborty ) –
When I had an understanding that everything is science and physics and math, all of a sudden in a day of Durgapuja, my mom took me to him to have a chat and enjoy Durgapuja in his house.
Initially I denied as I saw him in TV talking about old cultures, I said I am a man of science and he is talking something different, my mom said listen you can see "blue lotus" in his house if you come you can see that.
That's the reason I went there .
We started talking and all of a sudden I saw stephen hawking in one of his common pictures with him.
I was super surprised, I asked him why you two are in common picture?
He said "Dadubhai, we had a talk about Bharatiya culture science and his science" .. I was totally became his fan,, but then I asked him, so in your point timeline is constant or it's dynamic ?
Out of curiosity I used to think like a ever learning child in those days and my theory was timeline is static and we are all in fixed frames which is set in a line.

He said " Timeline is constant and fluid at the same time unless you can be beyond the frame you can't see, when I say see, it's not normal vision".

We started talking more, he said "Dadu there is a process to be blue lotus, you don't need to see it rather be it".
At that age, I didn't realised it, today I do may be.
I used to go to him when ever I used to feel like meeting him, once I went to his house when he was sleeping, I didn't disturb him rather stayed outside of his house for several hours, and somehow I fall asleep, when he saw I am sleeping outside of his house in a chair, he said why didn't you wake me up.

I said you were sleeping I thought NOT to disturb, that day we had a talk, I learned whatever happens in life, I have to be rooted and humble, I started study more Sanskrit from him and he was translating a lot many things to me..
Book? He was more than a book for me.
When I meet this amazing person from Japan,, I got the similar vibration, Do you know everyone of us have a vibration and aura?
Once you understand it, life become easy and simple. There is a mirror inside your mind, which gives you black and white and grey colour at the same time, as we grow old our memories try to become grey, with yoga you can make then black as dark which absorb all colours and while which has all colours.
Use your inner core and power, you will get LOVE in nature. That's GOD for me.
A lot many students who used to learn from me saw I have Bhagavad Gita in my bookshelf, along with all programming and animation books. Do I know everything of it ?
NO! Still I know it's part of Mahabharata, if you read total Mahabharata, you will know "Bharata" .
Will talk more about my investment and funding and growth and connect soon, why I am sharing all these?
Don't I have work to do? May be I can manage time .. Shhhh how I can do it that's my little secrete.