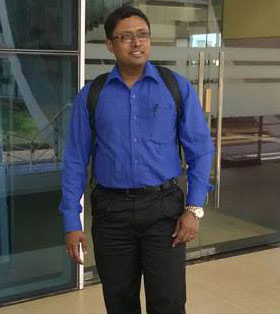 Life Story: Come back within a year – sleeping for 2 hours a day and hunt for new employees. Support from existing ones.

Year 2009 end 2010 starting: We moved from big Salt Lake office to a small rented office in Salt Lake near AC block.
We started making games on Java along with NOKIA platform, I didn't stop after the stormy days/ nights, my bank balance became limited.
After paying salary, rent for new office and building the new infra broke almost my financial situation.
At that time, I started exploring Orkut, and few other communications, I understood the local market is not the place where I can get
1. Ecosystem
2. Employee
3. Business
4. Money
5. I'm unable to make anyone understand what we are doing!
One fine day, while working with limited employees in that space (mainly I started making our own game titles), I started reading how NOKIA game market works, and how in other parts of the world hardware companies are willing to work with developers.
I had a keenness to make folk stories into game, and making edutainment related proper games. While exploring, I used to do ONLY breakfast and concentrated on eating protein and carbs with a perfect combination.
Near HDFC Bank area on those days, a local Sattu guy used to make the same (dry roasting grains or grams, most often barley or bengal gram). I started eating the same (INR 10/- per glass enough to manage a balance), it's not that I can't take it from my parents, it's my own fight hence I need to fight it alone. Simple mantra in life, work like a monster, think like a GOD, act like human, made things possible and with a very small team, we started making simple games, I started moving from one part of the town to another part to network explore and concentrated on making our website ranking on the top in Kolkata, and hence whatever we used to earn, slowly I started buying domains with relevant keywords. Several international client's started giving their work to us, I was open enough to share inputs how much we have as team, distributed one part of the team to Sodepur and another part of employees in Saltlake .
Took one website developer to create demo template (HTML n CSS).
Probably working with commandos are one of the best way, we made profit with good success, atleast we can now concentrate on making own games released from India with Indian concept, for Bharatbarsha. We did several websites, SEO, Games, started exploring Virtual Reality as a technology (As I was working slowly on that using VRML) but never had an opportunity to release anything on the same.
I must admit one person in this, the broker who suggested this place, I am ever grateful to the gentleman, Mr Bidhan didn't took 2 months rent advance (that's his earning that's how he runs his family).
May be he liked me ! May be he felt someone is trying hard to sustain.
Infact, he himself referred us to few factories so that we can make few tech solutions for them.
Coming back, we learned we need two min backup to sustain the business, along with several other activities we are doing and stop sharing success to the market.
While doing that, another Bengali entrepreneur, called me once, Mr Bibek, he asked if we can make website for his company and make that popular to grab business, to be honest I used to look at almost all business owners in T*E Ko***ta as a successful business guys.
Sorry, I am talking different, well Mr Bibek gave us the order for his company, time to prove we are not only good in international but national as well, we made it and in time, they started getting enq from out of India, in due course of time, Bibek da, got to know we made a great success. Will talk regarding the same in future for sure, this time I MUST admit, he took me to ice-cream shop, I felt real warmth while eating cold ice-cream.
Mr Bibek spent good time with me along with two more Bengali businessmen – time will come when I will talk about them. Yes, in life in so called corporate world you can have well-wishers as well. Why out of all NOKIA, Social Media, Hardware companies I am talking about a small order from local?
As because this is how you can support another startup, offload some work to them, take a chance and grow them.
I was broken, I was struggling, my team in Sodepur sacrificed, our employees never got to know about the financial crunch, Bibek da, didn't knew about the same, but he trusted a young person who is trying hard to sustain.
We need more people like him, I am sure we have a LOT in Kolkata, it's in good hands.