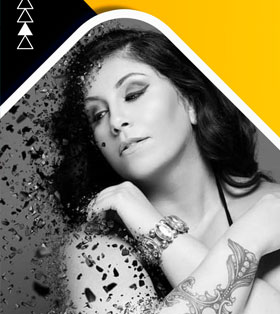 It was 2008-2009, I thought to start our own product pipeline, own game titles in different ways.
I thought why don't we make characters from real models and actors? Hence I started approaching local models in Bengal, had a talk with one of my photographer friend. He connected me with a local young model who came from Shiliguri to establish herself in Bengali movie industry. The connection was awesome, and we decided to go for an unknown tech journey – I don't know how we can do shooting for 3D game character as there is no studio for motion capture, and she don't know how we can make her as a character.

While exploring opportunity, I started digging into my social media account, few modelling website and started sending friend req to few unknown models. Somehow, I got in touch with few amazing models from EU and USA who understood what I am planning to do, I made several of them as 2D superhero. Couple of them started talking about us in social media and I created the entire plan of making a universe of hero's and powers in story based game.

The biggest issue was – there was no ecosystem in Bengal to support such tech/ or anyone whom we can make understand what we are planning to do. Once somebody send me a friend req from UK I saw a POP singer wanted to connect. We started talking and realised she is an amazing upcoming POP singer.

She asked me if I can make her as a superhero! Of course! That's like the easiest thing for me, but what she did was just awesome, she said, I don't want you to make it for free, I want to pay you. Her offering was NOT much, but she wanted to pay hence it's my responsibility to give 10X back what she is paying for.
One of our team member made the character and I improved it in a level so that it becomes a proper comic character.
Plus, we did a story for her, created power for her, studied her anatomy to make the character super awesome.
She got super happy, and asked us to make calendar for her, asked us if we can make game for her character.

We did the graphics, made the calendar, I never stopped there, I started shouting in my social media FB, Orkut various other model management and artist platform talking about her. Slowly we became friends instead of only client – designer relationship, we started sharing thoughts about our life.
Several other models from EU, started connecting me, readers may think wow, what a lucky person dealing with models and stars! I don't know about LUCK! One thing for sure, all these women started trusting me like a good friend and started referring me as a source where they might get a bit shout.

After few days, one agency connected me in Asia and asking if I can refer them good models to work in their projects. You may think from tech company to model management!! NOP, what I did, I started referring them to few agencies so that "my internet friends" get some work.

My vision? I wanted to explore this world of glamour. How others accept and work in ASIA n EU. I never ever charged any money from anyone, max of them I never meet in life.
Few of them became model in play**y mag, few of them became cover girl, few of the men in models list became popular. Well, that's a different story, will share more about the same someday.

Me? Well, I was focused – how I can bring revolution in Bengali movies to make our own models as game character in our own title based games. I was writing story of Katya and Ashwathama the immortal.
Making a different team dedicated for own product development rather than outsourcing jobs.
Thinking if I can make a platform for all those models n actors and connect it with our gaming platform.
Thinking if we can make a different business model.
If you are getting -$100 give output of $1000+ or more – then you can see growth.