Life Story : Speaking in Entrepreneurs' Club while mother admitted in ICU – how I took oath to become international speaker 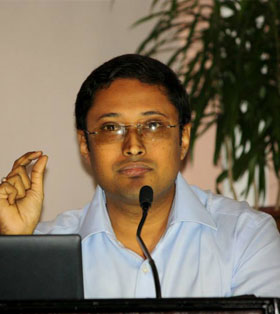 SLife Story : Speaking in Entrepreneurs' Club while mother admitted in ICU – how I took oath to become international speaker

Year 2012- 2013 I was running faster than anything to grow three business altogether : Our Game Production, Education and Model & actors management .

While running that we started exploring franchise market and successfully opened one out of India.
We became partner in several places in Asia for manga game dev, comics, animation, programming and design.

From the club the Hony Secretary proposed my name to be a speaker in the first "talk of entrepreneurs' of Kolkata" and "then" president (whom I admire as a Bengali businessman like anything ) called me and asked "you have to speak in the first talk series".
Of course it's an honour for me to speak there in front of so many Kolkata based entrepreneurs'. I agreed…
While moving fast I ignored my family probably, and cutting the story short, on the day I am supposed to speak, my mother had a stroke!
Me and my father took her to hospital in critical condition! It was CMRI and thank god doctors started all the possible things that they can do.
While it's happening, I called the existing president and secretary and explained my situation.

Him: Can you come?
Me: I gave you my words, I'll be there.
Near evening time, doctors said, she is fine and out of danger, call came from hony secretary – "How is your mother now?".

Me: She is OK now and I am coming.
I was there in Bengal Club, a little devastated in dress, thinking of my words, my promise that I will be there to speak about "My Story".
Before I start, President gave his awesome welcome speech and told everyone – 'Arijit's mother is in ICU today but he is here that's how entrepreneurs' do' .

I am not sure how the speech was – it was good or bad! I downloaded things in someone's laptop, and started talking from my heart.
Back of the mind, my mom's face was coming, I hope she is OK now. Well, maybe I was not professional enough as after the speech after few days someone gave a feedback that "My Story" session needs great speakers.
I took this as a learning curve, whatever happens, one day I'm going to be an international speaker and I'll always speak from heart and real experience.
From that day onwards, I don't look at PPT while I speak, I don't prepare myself, I don't look at the given topic, I wait for the MC to announce the topic and I go full deep dive from my experience – mix technology, business and finance with little fun while I speak.

Learn from everywhere (including a child) , you need people in life who can give you such feedback to grow.
You just need self confidence when you are speaking, while starting World Leader Summit – that's another story why it started and how it started – I keep giving confidence to speakers who can't speak in English.
I started learning different languages, example Russian, French, as I know Sanskrit, I felt it's needed to know more.
My learning? don't judge any person from the first interaction, a lot of us do this mistake, we take someone from first impression, there are smart people who can give first impression like a demi-god, try and dig deep and understand the "why factor".

There might be situation in someone's life, happening that very moment, they can't perform great. Give option and chance to them, they will become world leader and speak in front of 95+ countries. Another learning, the mistake I did, while you deliver your present, don't think what's happening in some other part of your life, try and enjoy the present.