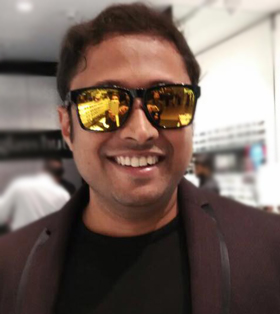 It was mid 2002 or early 2003, while doing my business I am doing MCA; my own created comics stories which I used to do in school, was asking me a lot of questions. I wanted to publish them, and couldn't find comics publisher on those days. There was a question in mind while teaching students and doing machine assemble – when will the market ready for the animation, game development and VFX and comics in Bengal! While looking for the "Why" I got in touch with a movie producer and distributor based in Chandni Chawk area.

I wanted to meet him; he gave me time to meet in his office. I went there with my drawings and works in a CD. When I entered in his office, he said – “What! You want to be a hero in movies?” – I smiled and said “No, I want to introduce 3D animation and VFX in movies”. He saw the demo; the immediate reaction was "Awesome, you are doing it alone?" I said "no Sir, I have a small team." After that we used to meet every week, usually on Fridays as I used to travel to Sundarban’s on Saturdays. One of the very old film director, asked me to re-do his movie poster; “Vish Bhrikha” it was black n white, he was not in good shape to pay me for the works, so they asked me to do this for free if I can, well yah we did the work and it was highly appreciated. Slowly I was taking care of few companies’ computer systems as AMC. And this Punjabi gentleman, used to listen to all my crap idea’s and science fiction stories I wrote in school days and while talking I was improving those stories too. One day he invited me in his house to chk his own PC, while making it perfect, his wife started treating me like her own kid, she became my Aunty. Sir became my Uncle, I used to play very bad music at home and late night I used to call uncle to show my composition. Without complain, he used to listen to it, and used to say "Beta, it’s OK, but not good" he never ever complain that he need to sleep at those late hours. Time was running, slowly I was growing and looking for a space in Kolkata , one day I was asking him, can I get a place to start in proper town. He said why not, start in my office. Not everyone will offer his office space, to a guy whom he knows for less than a year. Hence I got my first office address in proper town.

Uncle’s daughter became my sister, she used to talk amazing English, and coming from a Bengali school, I was horrible; it used to be a mix of Hindi and English mix-mode conversation with her. Within few days, I met his son, and wow, I found "Me" in him. Both love comics. I never ever had those DC and Marvel comics access; neither had he used to read Phantom or Mandrake. So we started exchanging ideas and explore each other. Slowly we became best buddy.

As I had passion to do things in Bengali movies, I met couple of directors with my VFX demo, unfortunately there was no taker. After roaming around in and around the studio area, one director asked me if I can do a VFX for him, pure 3D animation with characters, and again it’s for free. This time, I felt, is there a taker in this market? Am I doing wrong? Doing MCA is helping me to do anything in business? Well, I failed to get any paid works from Tollywood industry, and took a oath, I’ll come back to this movie industry with money and strength to make things happen in my way. I’ll be adding value. That’s one of the core reasons I did various movie based games as game partner in Bengali movies and hired multiple models to be my game characters. While making games, I took them from real life, to be a superhero in our games. I wanted to give back; I wanted to make things happen from Bengal.

One day I realized uncle is not doing well in business. He expressed that he is lacking funds and people to run his own venture; he wanted to shut down his company. He had to support his family, and he asked me to leave him, he said I can’t give you any support; it’s not good that you should be tag along me. I saw a guy, full of life, always smiling and singing, asking to leave me so that I can fly. I said “ I’ll never leave you”, he said “Your choice”.

Before selling the office, he asked me shall he sell it or not, there was no answer from my part, I was asking can’t we do something to run it again? Anyway the office got sold; I realized what was happening to Uncle. But he is ever smiling, never complain to anyone.

That day, I decided, I’ll be helping entrepreneurs’ in whatever way I can, I’ll try and help people in whatever small way I can, and for that I have to earn money and make things happen in a very silent way. I’ll be ever smiling, whatever comes in life. I’ll give back to the world. But life was writing a different story for me.