Life Story: The start up travel 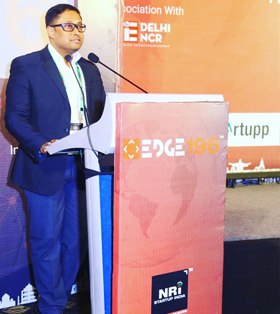 Life Story: The start up travel

Year 2015-2016
Once we decided to help Indian startups, the USA based guy asked three of us to come and travel each and every city of India, meeting several other accelerators, incubators, startups, co-working places.

Like others I've opened my network to the gentleman as he wanted to invest money in Indian startups and finding unicorns from the country.
We started from Mumbai, and of course Superman-Vs-Batman was about the release. As a fan of DC comics and Marvel and a comics freak, I can't miss that movie for sure.
We started meeting amazing startups – day usually starts from 7 AM and we didn't have an END, trust me on this it's not an end, we used to sleep sometimes in flights.

The founder is a devotee of Krishna, hence me and him we had several talks while we used to travel in Car.
Him: "Why don't you become devotee?"
Me: "I am already, I can see Krishna in that tree, why do I have to go to temple for it? For me Krishna is everywhere."

We had good chat when we used to travel and during calls we used to do a lot of talks (I still miss them).
Well this is not about these talks, we travelled several city, Mumbai, Bangalore, Hyderabad, Kolkata, Delhi, Ahmedabad etc.. we met LOT of start-up's and ecosystem players
Sometimes we don't even know which city we are travelling to, unless the night comes and the tickets are DONE.
After two city, we started staying in temples, mainly Askshardham, I personally LOVED it, the main saint sometimes used to cook for us, and yah being foody, a crazy one all three of us, started eating like Rakhsha.
Once, Mohit and jay was busy in some meeting and the founder wanted to eat satvik food, hence again I had a talk with him about tamshik, satvik food etc.. we had difference of opinion and I am lover of nature, not on stones.
He is more of different, a Brahmin can put "life in a stone" once he can be connected in all-mighty, don't directly conscious about mortal world and "be in love always". – this is my own thought I might be different the way you are thinking doesn't mean I am wrong or right.
Like if someone from other country is singing Indian song or dance like Indian's we become so joyful, that's awesome as it's the flow of love from human-to-human, an Indian do the same, they sing or dance in western music, if the locals of that country jump with joy for the same then it's a bond.
While travelling, I took them to so many angel investors and several incubators, the same from other two lion's as well.
One incident I still remember, we were watching a movie in flight, three of us were laughing as it was funny movie all of a sudden the airhostess became angry to ja**n, she said odd words to him, we didn't say anything to her as it was NOT totally cool during flight. When it landed we were outside of the flight waiting for the bus to take us, Ja**n decided to tell her he was not wrong and we were not laughing at her, we were watching the movie.
Me and him, went upstairs and told her the fact, NOW after the cold voice of both of us, other flight attendant wanted to apologise for her behave. We said it's OK and move on.
It's NOT always fault of MEN, it's not always men laugh at women, opposite happens too. It's not totally cool to behave with passengers without knowing the facts. Watching movie in a flight is totally cool, while we were not disturbing others, laughing in NOT a crime "YET" in flight unless it's too loud and some other passengers are feeling disturbed, rather it was a discussion about batman and superman and if batman become superman what can happen.
We meet people in journey who eventually became part of NRI Startup India, the intention was really good, mohit and jatin became more close to me, we had work, fun, food-time, grilling startups.
I know I am the devil in the gang as I used to grill them a LOT, my job is not to be soft to people, my job is to bring out the best – out from them.
I am hard-nut to crack, I love to share and offer platforms to others, if they feel they JUST need a free name out of it, I am NOT mother Teresa, I can remove their logo from our marketing materials, international connections are common for me, NOW we've 95 countries directly working in our ecosystem, one or three particular country don't make you global.
Travelling EU for a joy-ride don't make you understand the business world, or how funding happens.
Travelling don't make you wise, it depends how you travel and whom you are missing and how you are getting knowledge to transform that into wideness of sea of knowledge, then you can walk towards being wise.
A battle is NEVER own in the battle-field, the fate of battle always decided before the first bullet is even fired.
While in the move, we have been deciding whom to fund and how to hold hands, the solo decision is done by the founder, we acted as catalyst.
Founder wanted me to join their core team, I agreed the same but in due course of time he asked me to sell virtualinfocom to join them full time and shift to Gujarat.
I don't know if I've done right or wrong but virtualinfocom is my first baby, and it's my blood NOW, can't think of selling it, I know attaching to one company is not a good thing in today's world, but that's how I am.
I decided to make more efforts to build more platforms, and more companies in several other countries just like a strategic investment.
May be I can see what's gonna happen when you take wrong people in team/ employee, I've faced that once and paid a huge price for the same, will share how so called back-stab happens when someone is doing good.
Two of the most promising startups became part of them, with a great mind, they supported a lot of more starups, I saw them became happy, I helped few of them become hard-nut and do "more" in life.

My job was done, I wanted to make the ecosystem to grow and few startups must get help..
After a year, they asked me to meet again in Delhi in another program organised by them, the founder wanted me to conduct the startup award, ..
End of the day three of the core founders were happy, meeting with old startups who became their portfolio was done.
End of the day these portfolio companies came and hug me, smiled some cried, that's all I wanted.
End of the day, I'll leave the mortal-body – my memories will be there if people remember me with good works, that's what is all needed at-least that's what my thought was till 2017- end.
I execute, make deals, negotiate hard, talk rough- as truth is always rough.

I've been in shadows while it was needed to make things happen properly, I want to give back more, it's not easy to take.
I firmly believe, it's easy to give, really hard to take.