Life Story: The all of a sudden Friend from Taiwan – who agreed to be with us out of love for another human. And a lifetime friend from Ukraine. 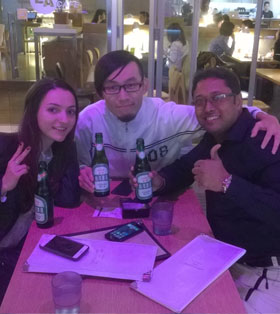 Life Story: The all of a sudden Friend from Taiwan – who agreed to be with us out of love for another human. And a lifetime friend from Ukraine.

Year 2013- 2014 probably: we were expanding our network in various Asian counties and I was in my nomadic life. This time it is Taiwan and was looking for more partners and growth from several places. Before I hop-in to any country on those days, I used to learn about their culture and places to explore local food. While vising the country as it was pure business meet-up I was planning to explore few different technology and different business (I was introduced to cosplay in Korea before that) hence I wanted to explore if we can get cosplay materials making partner in this country, and when you are looking for something, the universe usually helps you to find the way. While my business meeting was about to end, I was sharing what's my plan with others in the event, there were several others from various countries, one lady said she would like to join my "exploration of Taiwan". We started from our hotel in the evening, I was looking for a good market place to enjoy local food and understanding of local garments and how their economy works. We went to a market place, and as my friend became hungry we went for some food, surprisingly she ate a little not like me (hah I was bulking-up that time), and she gave her portion of food to me. I started eating it as if I was hungry for ages. She: "Man, you are some hungry person". Me (While chewing the meat): Yah. While finishing the same, we started exploring the local market and I was looking for a hidden food area, which was mentioned in someone's food blog. While searching, we started asking as it was not showing in map properly, she asked a local young gentleman (he was running an amazing local drinks shop) – we got the idea how to go. After entering the hidden market, we found it's not that big as described by the blogger, as an eternal foody, I started eating sea food and my new friend found me a "universal hungry" man. When we went out the same young guy saw us, he came and said, Him: "Did you found the place?" Me: "Yes". Him: "Do you guys want to see more in Taipai ?" She and Me : "yes yes yes" So he took both of us in his car, we went to their home, and his parents welcome us, his mother showed me Hindi movies collection and said they LOVE Indian culture and movies. That was a WOW factor for me. Well, after a while this new friend of us, took us to several places, as it was real late night we decided to have some beer together. We chatted like old friends. Ele*na wanted to go to washroom, I followed her,, as it's a different country and it was like all empty, I felt to stand for her near the door.. When she came out, she asked me, why I am there I said you are like my friend and I felt I should stay as it's far from where we are sitting. The guy from Taiwan honestly is in my memory , and will be there till my death there was no reason for him to give us company and show us the places.. Ele**a became my friend, when I was in Ukraine we tried to meet each other, somehow I missed it, and that's a total loss for me. I respect her and I think we became friends forever, though I know there are people who give different perception about me as there are limitations of information and inputs, but the strong bond never ended. It's not always you think of doing business directly, you need to create good relationship to do good business and once you make amazing friendship, life become beautiful and good reference works at its best. I entered more into private investors space, VC, incubation, angel investment and diversification of business while doing gaming business. Expanded in several verticals and domains with domain knowledge and negotiation, did things for free (which I should've think wisely earlier) But relationship with friends and people will be cherished in mind forever I would love to talk about another friend from Taipei in my next writing, he is JUST AMAZING.